HBO, CNN, Warner Brothers, DC Comics, and the rest of the Time Warner empire are now owned by AT&T.

The decision will likely be seen as good news for other pending and potential mergers, including T-Mobile’s plan to acquire Sprint, bids by Disney and Comcast for 21st Century Fox, and Sinclair Broadcast Group’s purchase of the Tribune Company.

Americans could be paying an extra $571 million a year for TV if AT&T buys Time Warner, says DOJ’s expert economist

AT&T quietly announced it would be jacking up its “administrative fee” for all customers from $0.76 to $1.99, roughly $800 million in additional revenue every year.

… ISPs are going to slowly-but-surely impose an endless array of new restrictions and caveats.

In total, WatchTV has more than 30 live TV channels, plus 15,000+ TV shows and movies on demand, and allows you to subscribe by way of updated AT&T Wireless plans. Non-AT&T customers can subscribe for $15 per month directly.

Sling TV is now offering a selection of 100 hours of TV shows and movies for free.

Why YouTube TV Is the Future of Cable TV

YouTube TV has the major local channels, sports content, and most popular non-sports cable channels as well, for $40 a month. https://tv.youtube.com 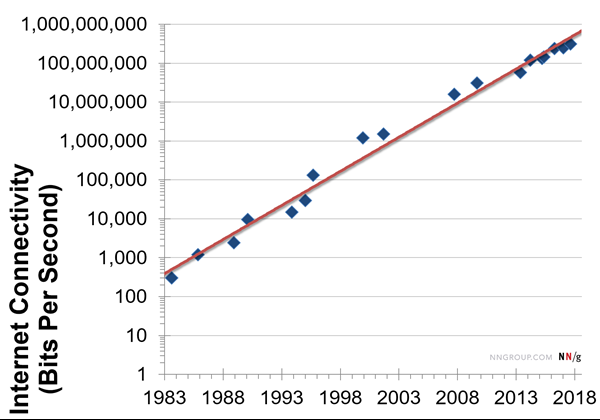 An informal study of Bandwidth over the years. “A high-end user’s connection speed grows by 50% per year”.

ATT, Comcast, and VAST networks are now offering fiber internet service in Visalia, although it is still pricey. TPX, (www.tpx.com formerly Telepacific formerly Arrival communications) is providing internet and phone services over Comcast fiber.  ACC Business is subsidiary of AT&T that makes purchasing business internet and phone services from AT&T much easier. It’s worth reviewing your options every couple of years. Definitely check options when your carrier contract expires – don’t assume your previous deal is the best you can get. Consider working with a telecom broker– contact us for a referral.

Windows 7 backup no longer works on 32-bit Windows 10 installs after the latest upgrade (Version 1803). If this applies to you, an alternative backup will be needed until or if this bug is fixed.  “A moderator on answers.microsoft.com claim that MS plans to remove system image backup completely as its not being maintained…”

In addition to the three outdated versions of Windows, Microsoft is pulling the plug on official forum support for the Office 2010 and 2013, IE 10, Surface Pro, Surface Pro 2, Surface RT and Surface 2, and Security Essentials.

The Outlook mobile app is a good choice for those who need the highest level of mobile email security available in Office 365.

Due to the new TLS 1.2 security protocol, your version of QuickBooks may not work with many features that use an Internet connection after June 30, 2018.

Use the TLS readiness tool to fix QuickBooks desktop 2015 and earlier.

TLS 1.2, an internet security protocol used for web browsing (think https:// ), is quickly becoming an industry security standard. Browsers that connect over older SSL standards will stop working with QuickBooks, and with other secure sites as they stop supporting the older standards. If you accept credit cards or payments on your website, you will need to be using TLS 1.2 to be PCI compliant starting June 30th.

Every month there are new data breaches. Many are improperly secured databases on cloud servers. I include them in the hope that you will see the need to use unique, complex passwords for online services, so if one is compromised, it doesn’t threaten all your online credentials.

Password reset flaw at internet giant Frontier allowed account takeovers
Frontier is one of the largest internet providers in the US.

Coca-Cola is the latest corporation to experience an internal data breach.

“It seems like this is a database with pretty much every US citizen in it,”

…2 terabytes of data that appears to include personal information on hundreds of millions of American adults, as well as millions of businesses. While the precise number of individuals included in the data isn’t clear—and the leak doesn’t seem to contain credit card information or Social Security numbers—it does go into minute detail for each individual listed, including phone numbers, home addresses, email addresses, and other highly personal characteristics for every name-  including more than 400 variables on a vast range of specific characteristics: whether the person smokes, their religion, whether they have dogs or cats, and interests as varied as scuba diving and plus-size apparel.

..the government continues to conduct surveillance on foreigners — and Americans — under the same legal framework the NSA was subject to prior to the leaks, after lawmakers reauthorized the bulk of the government’s surveillance powers this year with almost no debate. And, a little-known ‘catch all’ executive order gives the government unrestricted powers to collect data, which a former NSA executive turned whistleblower called a “direct threat” to Americans’ privacy.

Selfish Ledger: The question, therefore, is not whether digital DNA can be used to influence our behavior but rather to what extent our behavior can be influenced, or even controlled.