Windows 11: recently discovered problems include wrong colors in editing software with certain hardware, and performance problems with some models of solid state hard drives. An AMD performance issue with Windows 11 has not been confirmed by Microsoft yet.

Window 10 versions 2004 and prior will not receive any further Windows updates. The upgrade to the current Windows 10 21H2 version is free and recommended.

As mentioned last month, all of the Windows 10 21H2 features are already available in 2004, 20H2, and 21H1 versions code, making it a quick and easy update. If your Windows 10 version is 1909 or older, it will be a complete reinstall/upgrade of Windows.

Changes to the MS Office desktop toolbar can be a bit confusing. The “ribbon” is hidden by default.

If you want the top toolbar to show, click on the arrow circled in red and check “Classic Ribbon” and “Always show Ribbon”. 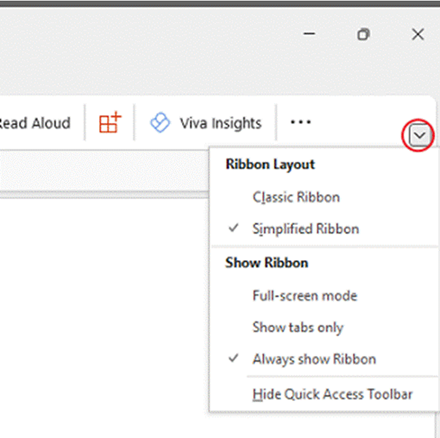 Mailchimp has been acquired by Intuit.  Mailchimp is an emailing service similar to Constant Contact.

LastPass is becoming an independent company.

LogMeIn was acquired in 2020 by a private equity firm, and it is unclear how the relationship between LogMeIn and the new independent LastPass company will look.

LogMeIn acquired Lastpass in 2015. Pricing of LastPass premium was increased several times since the acquisition.

The Global Chip Shortage will likely last into 2023.

The DoNotPay app is sold as a “robot lawyer”. Get help with unresponsive online service companies.

Tesla’s app server went down for a few hours, owners were unable to connect to their cars.

How to blur the image of your home in Google maps street view.

How to opt out of spyware in your smart TV.

Apple Air Tag is a small tracking device that can be attached to your keys or other things you want to be able to find.  Similar products work with Android.  Android also has an Airtag detector if you think someone may be tracking you.

A flaw in the Log4j Java library is already being exploited. This affects any systems that use this particular software as part of their design.  Many vendors have released updates:  Ubiquiti Wi-Fi devices; Apache; List of more vendors affected. US CERT advice.

“LastPass investigated recent reports of blocked login attempts and determined the activity is related to fairly common bot-related activity, in which a bad actor attempts to access user accounts (in this case, LastPass) using email addresses and passwords obtained from third-party breaches related to other unaffiliated services.”

LastPass customers may want to add two-factor authentication to their accounts to better protect it against unauthorized login attempts.

We will be raising our hourly rates to $140/Hr. (3.7% increase) starting in January to keep up with costs.

Managed service agent costs will go up slightly as well.