Microsoft has released Windows 10 version 21H1 – It will show up on computers as an optional update as it gets gradually released to more users during April and May.

This is a minor update for those who are already on the recent 20H2 or 2004 versions. Earlier versions of Windows 10 still require the lengthy reinstall / update process for a new version.

One compelling feature is a speed increase when opening certain documents. Other changes are minor.

Windows Server 2022 is out for testing. New features focus on security and integration with online services provided by Microsoft Azure.

If you see Microsoft Edge WebView2 Runtime in your list of installed programs, it is legitimate. It will now be installed automatically with Microsoft Office 365 software and is required.

Apple has just issued iOS 14.4.2, an urgent security fix for a vulnerability that has already been exploited by attackers.  Install it right away.

Apple’s operating system update, iOS 14.5, is due to launch in April.

Ubiquiti is accused of covering up a ‘catastrophic’ data breach.

Anyone may have been able to access any Ubiquiti networking gear that customers had set up using an online account to control their devices via the company’s cloud service.   If you have Ubiquiti devices installed that use an online account (such as a cloudkey) and you haven’t changed the passwords on the devices since January 11th, change them now. Contact us for help if needed.  This would not have directly granted access to the network, but any connected routers could have had rules modified to allow unauthorized access.

SMS text messages are a weak form of security. There are tens of thousands of employees at mobile stores who can be tricked or bribed into swapping control over a mobile phone number to someone else. There are also companies that anyone could use to silently intercept text messages intended for other mobile users.

You may see prompts for updates if your computer was left off overnight. These are legitimate and can be installed. They are caused by a planned update which was attempted while your computer was offline. The update then tries to complete when you reconnect to the internet. 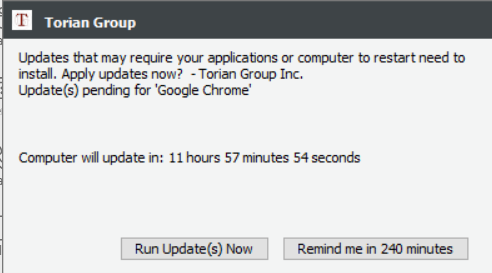